In Part 1, we heard about how God reconciled both Jews and Gentiles to himself. He did it through his Son’s atoning work. Ephesians 2:13-16 uses temple language to demonstrate its reality. In the Holy temple of Jerusalem, God’s presence lies at the center and for the Jewish people, they cannot enter except for their High priest. But Israel gain access to God once for all because Jesus becomes their great high priest who offered himself as a sacrifice for sins. And at the same time, the Gentiles were also brought near to God. They were only allowed to access outside the temple courts and threatened by death if they insist to enter the inner courts. Yet God in Christ brought near those who were once barred to enter the temple.In this sense, it is Christ who is our peace brought the two peoples one. By the doing so, he reconciles the whole mankind to God.

Now, Paul continues to use temple language as he expands the accomplishment of redemption towards it application by the Holy Spirit.  Our sermon had these three points: (1) Our Alienation without God, (2) Our Reconciliation by Christ; (3) Our Unification with Christ. And we will continue with the second point starting from verse 17 and end with the third point from verses 19 to 22.

Our Reconciliation by Christ

Verses 17-18: “And he came and preached peace to you who were far off and peace to those who were near. For through him we both have access in one Spirit to the Father.

Jesus, after his atoning work at the cross and resurrection after three days, stayed with this disciples for another 40 days before finally ascending to heaven. These succession of events are often neglected by most Christian and often imagine Christ’s work stopping at his death. Yet, according to our creeds, Christ continues to reign in heaven even today while we await his return.

It is important we have a complete view of Christ’s on-going work because helps us understand our semi-eschatological state. Spiritually, we received from God all the benefits of Christ’s redemptive work through the Spirit and yet we await the consummation of all these when Christ returns for the second time, believers are bodily resurrected, God judges everyone and He renews heaven and earth.

In between these states, Christ builds his church. Paul captures this reality when he wrote “And he came and preached peace to you who were far off and peace to those who were near.” Christ’s coming here may point to his incarnation (adding to himself human nature) but since Paul mentions Christ’s atoning work in the prior verses, then logically this refers to 40 days stay after his resurrection. Therefore, the event of Christ preaching peace happens after his ascension.

How did Christ preach peace to those who are far and those who are near? After accomplishing the elect’s redemption by his death at the cross, Christ resurrected and poured out his Spirit to his people at the Pentecost. According to the account to Luke, Peter, filled by the Holy Spirit, preached Christ and proclaimed this promises to all who believes: “Repent and be baptized every one of you in the name of Jesus Christ for the forgiveness of your sins, and you will receive the gift of the Holy Spirit. For the promise is for you and for your children and for all who are far off, everyone whom the Lord our God calls to himself.” (Acts 2:38-39).

It is by the preaching of this message, the good news about Christ’s saving work is how Christ preaches peace to those who believes. It is in on-going work in the world through the church. Whenever Christ death is proclaimed, forgiveness of sin is offered. God continues to reconcile himself to the world through this message of reconciliation. Paul wrote in 2 Corinthians 5: 11-21, “Therefore, if anyone is in Christ, he is a new creation. The old has passed away; behold, the new has come. All this is from God, who through Christ reconciled us to himself and gave us the ministry of reconciliation; that is, in Christ God was reconciling the world to himself, not counting their trespasses against them, and entrusting to us the message of reconciliation. Therefore, we are ambassadors for Christ, God making his appeal through us. We implore you on behalf of Christ, be reconciled to God. For our sake he made him to be sin who knew no sin, so that in him we might become the righteousness of God.” And this the message we continue to hear preached in faithful gospel preaching churches of our day.

Our Unification with Christ

Verses 19-22: “So then you are no longer strangers and aliens, but you are fellow citizens with the saints and members of the household of God, built on the foundation of the apostles and prophets, Christ Jesus himself being the cornerstone, in whom the whole structure, being joined together, grows into a holy temple in the Lord. In him you also are being built together into a dwelling place for God by the Spirit.”

Paul continues to describe God’s on-going work of redemption in Christ by the Spirit. He reminds his Ephesian congregation its on-going effects. According to Paul, they are now: (1) citizens of God’s kingdom; (2) members of God’s household; (3) and part of God’s temple.

Christian Jews and Gentiles are now part of an international community. Before they we were separated by citizenship to a specific country or nation but now they all belong to God and their citizenship is in heaven. By faith, there are no more distinction between race and ethnicity. The Mosaic institution that requires anyone to join the nation Israel in order to receive the benefits of God’s saving work has been abolished by Christ in his death at the cross. It was abolished when he fulfilled all its demands and righteous requirements. No more proselyting. No more bloody circumcision. All who believes and repent are welcome to the family of God by adoption in Christ.

Christian Jews and Gentiles are both children of the living God. In Christ, they both have God as their Father. Becoming members of God’s household is the highest privilege granted to us by God’s redemptive work. Christ is our eldest brother. Unlike the brother of the prodigal son, He welcomes us with the Father. He robes us with his righteousness and receives us as sons. Adoption as sons is ours because of Christ. We now belong to God again and reconciled to him forever!

Now Paul shifts the metaphor from being personally part of a household to being part of the whole structure.  He describes our union with God in three levels: (1) Christ as a cornerstone; (2) The apostles and prophets as its foundation; (3) All believers as God’s dwelling place by the Spirit.

Christ is the cornerstone of the church. But he is also described by Paul as its laid foundation from 1 Corinthians 3:11. A cornerstone is typically understood in two ways. It is either a key stone or a cap stone. A key stone is the foundational part of the structure where every stone on top of it follows while a cap stone is the crowning stone of a complete edifice. It seems reasonable to assume based on Isaiah 28:14-16, Paul describes Christ as key stone or a foundational stone. Paul may have this in mind: “therefore thus says the Lord God, “Behold, I am the one who has laid[a] as a foundation in Zion, a stone, a tested stone, a precious cornerstone, of a sure foundation: ‘Whoever believes will not be in haste.’” Christ fulfilled Isaiah’s prophecy by becoming the cornerstone of the new covenant.

The apostles and prophets laid the foundation with Christ as its cornerstone. They are not themselves the foundation but by their preaching they laid down the message of Christ saving work and proclaimed it the nations. Apostolic teaching and not apostolic succession is what Paul refers to here as the foundation laid down. It is the gospel of God in Christ. And these words from the apostles are those we have now in Scripture. They are those epistles included in the canon of the New Testament.

Lastly, every believer becomes part of God’s church, the temple of God’s Spirit. They are being built together. God’s church is God’s work and not for any man to achieve by any its man-made method and worldly measure of success. We are the one being built and not the one building it as most modern church growth opponents often assumes. We receive a kingdom and not build it. The church is the spiritual temple built by God himself through Christ and by the Holy Spirit. It is created by the Word and Spirit. Christ builds his church and we are his building. Is it comforting to hear? Let us abandon our worldly ways of growing a church and focus on the mediate and immediate means God provides for building it – His Word and Spirit!

ZCRC(Imus), God reconciled himself to us through his Son and his Spirit. Peace and Grace are preached to all those believes. It is the message of reconciliation that Christ accomplishes our redemption and the Holy Spirit applies to God’s people. May the Lord continue to save his people. Amen. 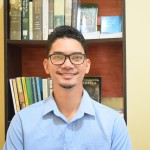 The Holy Catholic Church and The Obligations of Church Member

The Basis of Our Unity: Ecumenical Creeds and Reformed Confessions